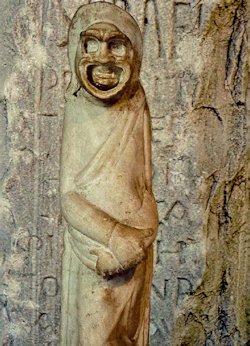 THE COMEDIAN STEPS UP

He was telling the one about
the old Byzantine test for heresy;
break his arms and legs, chuck him in the Bosphorus
if he floats fine, if he sinks fine, there’s your answer.

He was telling the one about the great divide
on Paynim shore as a way of speaking the sentence
containing the word Apokatastasis, come on you dolts,
metamorphose into something better.

He was telling the one about
what you can do with a loose mouth running
strung like a rubber band around an absence
you know, sucking in the world to save it.

He was etc – see, this is my mouth behind my mouth
for me to talk out of turn out of time
the acoustic boom off this wall like hell
stone-tongue clapper trap by the grace of God.

And with that mouth I say

I would not play light with the mother
Lady of the Way, Hodegetria
the inner knowledge   and the outer
show us the way         restore the city.

To wait 24 thousand years
for the ekpyrosis
only to return as what I was,
a one-man double-act.

Damn you Chrysippus.
My name in Greek means
the-Ern-who-swallowed-Eric
also translated as
self-contemplating Zeus,
ha, miching Malachi,
I’d call it self-disgusted
if they’d let me. All I ever
asked was some restitution
then along came St Peter
then that Philip with his
‘image which must enter
through the image’ which
I reckoned was a bridal suite
in a 5-star hotel with
the faux-classic décor of
the Origen franchise.

What’s that you said? –
the lady in the third row
with the Hammurabi T-shirt –
were you shouting ‘Luther’?
That devil who declared
comic actors are the wrong
kind of devil? Do you
take me for a Dimbleby?
Here in MediaCity often
misread as Mendacity
Question Time’s in
the studio next door.

And question time is always everywhere
so I dreamt the big ninety-five
hammered to the door in a myth
just to land this shit, as misread theses
and make way for Science.

Thus the law of Hammurabi
recorded the first nuclear formula
righteousness a mighty weapon
or soft mediation of the unpalatable
I don’t believe a word of it.

In the ditch next door the liars
we let run our business go oink
and the woman was shouting lustre
or lecher and no-one blushed
under a 5-star sky Dante was appalled.

Don’t get me going,
you’ve heard my Vita Nuova routine,
I can’t do it any more,
it depended on Beatrice being under-age.
Now they want me to pretend
she was a proper grown-up woman.
You’d be blinder than Homer not to see that
the bit where they arrive in Paradiso
with all those saints rubbernecking for a shufty
would lose half its stuffing.
Okay okay the make-up department
could doll her up as not quite sixteen,
old enough in some annals
to have been twice widowed
which only goes to show
historians can tell it as it was and is.
That’s what I should have been
as my dad always said but
getting back to Dante how about an Inferno
or at least Circle 8 Ditch 8 starring
Iain Duncan Smith as Chief Guy Forked Tongue,
just say the word and tell me when.

Iain Guido Smith did make division and gather the spoils
plied his bonny craft the Centre for Social Justice far,
tacking across the lake of fire all the way to Betsygate.

Then setting fires in Baghdad and Washington and London,
his smug little face caressed by the claw of the Lady Margaret,
he conspired in the smoky arts of a sovereign nation once again.

The image which must enter through the image deserted him
his stand-up was only comical when he tried for gravitas
his mirage bucket for storing mirage history had a fuck hole in it.

But as certain creatures can live on air in hope of future meat
his tongue flickered pinkly as the girl Europa struggled all at sea,
sweet she was and pretty as live bait foundering on the shore.

Can such scenes be used by proper grown-up men to have their way?
Can drowned children’s limbs be arranged to spell Breakthrough Britain?
Guido stoops to gather his spoils and build a new nation for old time’s sake.

Are you okay in the back row
or should we call in the medics?
I’d take the lot of you home
if I didn’t think you’re all asylum-seekers.
Yes that always gets a roomful of chortles,
you must love yourselves bitterly
to come to stand-up. Shout when I’ve
gone too far so I’ll know I haven’t
gone far enough. Have you ever wondered
how many people have died laughing?
I was making a list but lost count and you can’t
always tell the odds between humour and horror.
That’s the thing about this strawman Smith
or that Jackanapes Straw – remember him?
All right, let’s turn up the volume and unite or die,
it’s time for the finale of this famous celebration
and for me to put a match to our
blow-me-up Betsy of a benefit bonfire
punningly labelled, in case anyone
still hasn’t got it, Mt Purgatory.

I fell asleep on the train speeding through a long tunnel
under that mountain those invasive voices came in close
dedicated to their own preferment on the middle air.

I dreamt there was a Tory government and didn’t know the place,
heard dictation from the mirage book of history in self-effacing chorus
for instance: Troy fell on Damascus became a logical assumption.

They live in high towers above the river, sparky sparky they circulate
corporate ghosty men and women spin spin in golden circles
from the radiant centrifuge they measure the bounce in system collapse.

For instance: you can lead a horse to water even in the desert
but it’s easier to perform a miracle than speak straight in such times
and the times don’t change and they know it and lead on by rote.

In their archaeology of long occupation the dust of fallen capitals
rises over our heads and shows how even Jerusalem fell upon itself,
Jerusalem the Golden made dumb with a mouthful of ash.

Alan Halsey’s latest books are Rampant Inertia (Shearsman), Versions of Martial (Knives Forks & Spoons) and with Kelvin Corcoran A Horse That Runs: To & Fro with Wallace Stevens (Constitutional Information). His graphic work includes extensive contributions to Nigel Wood’s From the Diaries of John Dee (Apple Pie Editions) and Gavin Selerie’s Hariot Double (Five Seasons). The third volume of his edition of Bill Griffiths’ collected poems was recently published by Reality Street. He ran The Poetry Bookshop in Hay-on-Wye 1980-96 and continues to work as a specialist bookseller, www.westhousebooks.co.uk

Kelvin Corcoran has published 15 books of poetry and been anthologised in the UK and America. New and Selected Poems is available from Shearsman Books along with two major collections, Backward Turning Sea (2008) and Hotel Shadow (2010). In addition he has interviewed Lee Harwood for the volume Not the Full Story: Six Interviews with Lee
Harwood, published in 2008. For The Greek Spring, a selection of Kelvin Corcoran’s poetry about Greece was published in 2013. The Writing Occurs as Song: A Kelvin Corcoran Reader edited by Andy Brown was published in 2013. Ongoing projects include a hospital writing project for Medicine Unboxed, recording and performances of A Thesis on the Ballad with the Jack Hues Quartet and a new collection, Sea Table, from Shearsman in 2015. His Shearsman collections are here. A contributor to the original Molly Bloom magazine in 1980, he has also appeared in online editions 1 and 5.