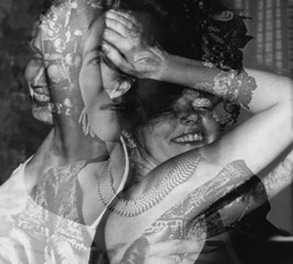 
No one could have been more surprised than I when Ms Gaffield contacted me to write an introduction for her new book of poems, which she claimed were a “translation” of my own. I remember spending some very pleasant days in Newport, Oregon in March of 1979, when Ms Gaffield was kind enough to take me up and down the coast exploring all the rock and mineral shops along the way. She reminded me then of the mouse that was, at the time, living in the apartment I shared with my sister, Pat, in New York. How I wanted to be rid of the blasted thing, but I refused to set a trap, for fear of karmic retribution. Mouse in the house, cat under the bed VERY HAPPY. The more the house falls into ruin, the better the cat likes it. Oh! Why did we ever leave San Francisco? This is where the ‘Worm Queen’ has led us, and the offended and unforgiving gods, Puss and Anubis.

But I digress. The poems, what can I say about them? Well, the first thing that must be said is that they are not translations. Some of them are pretty enough, but I can’t hear them sung. The girl is tone deaf! Still, to giver her her due, she avoids the stream of consciousness stuff and all that bad language and tales of personal woe that so many young women write about today.

The letters are another thing. She started writing to me soon after that visit in 1979, mostly about ghosts and her attempts to contact those in the spirit world. I warned her about this in the strongest possible terms. She is like a child with a toy, and the toy is a trigger to a nuclear bomb.

I don’t imagine she will ever come to much as a poet. I must remember to read her Tarot, and send her the results. It could save her a life of wasted years. That, and to tell her to stay clear of Jack Spicer’s spell.

THE CARAVAN OF STARS
A Translation for Rosmarie Waldrop


Whenever I approach a blank piece of paper
It is already filled with every word
That has ever been written. Some words
Fall silent in transit just as some nights the stars
Relapse into an official distance. Eve’s sin
Was to name Adam’s apple as her own. Here
Is where it leads us. Language fails
Lacking the vocabulary to speak of the times
We live in now. While stars stammer in their sphere
I myself was like the moon delicate and clear.

The stars were not content inhabiting
The firmament. They were jealous of the moon
For outsourcing them. They tried to whitewash
It with spiral nebulosity, but its force was stronger,
Troubling the tides till the storms raged
Covering the stars in cumulus. Time then to cleave
It  from the sky. The winds rise, the bough
Breaks. The hands of the clock close in prayer.
A woman sits in the window her face shadowed in leaves
Shining with the light that beauty weaves.

Cold and cloudless. A moonless void.
Who knew the moon was expendable?
Women wielding dustpans and brooms sweep remnants
Of light from the streets. The stars wait for children
To disclose their wishes, but they have forgotten
How to speak. Dog-headed Anubis,
The sun behind the sun, rides his chariot
Across the sky. Les Étoiles nourish the earth
With tears and in the tree a single ibis
All the sorrows of my heart—all the vanished bliss.

I choose the Moon, a dog and a wolf baying
At it. On each side a mountain and a tower
Hold up the sky. Below the sea a crayfish
Crawls towards land. The Fool is on his journey.
Broken treaties make fine tombstones,
Citizens drown themselves in machinery
And lament. In the cave of the wolves
Leaks and worm casts bloat and erode
What the walls conceal. The story ends in runes.
Madness stalks omnipotent and soon.


RED SKY AT MORNING
A Translation after Jack Spicer


The Fens asks grey for a word.
It is 8:37 a.m. Flat, low-lying
sedge. Below sea-level. Many rivers
sometimes natural. The word is
low.

The sedge asks grey for a bird.
I give you the lone barn owl,
a pair of golden plovers,
a cast of lapwings,
arriving from Siberia a knob of widgeons,
a male hen harrier that matches you
grey for grey,
a murmuration of starlings.

Grey asks the sky:
When you look at me what do you see?
--I see a lady sleeping on a rocky shore
and another in miniature sitting beside her.
Red sky at morning peers over the breaking
wave with his white beard flowing.

IN THE PRINT ROOM OF THE BRITISH MUSEUM

“It is disappointing to the casual visitor that only those who hold readers’ tickets
may enter the great reading room, for the endless shelves of books beneath the
dome and the hundreds of absorbed readers bent over their open volumes in
hushed silence constitute one of the sights of London.”
from the “Jottings from London” column in The Weekly Scotsman, 1937-38. Helen and Pat Adam

As the skylight diffuses late afternoon,
you enter the print, traverse an unsafe land.
Winter advances in rapid strides, shock
of white with claustrophobia in it. Snow-blind,
no sound of bird or beast. Hummocks fringe
the coast, the eye distorts the contour lines
of ice floes, the cruellest lashing wind.
Then your fingers begin to skim the polar
continent on runners made of mud and moss,
whale bone and water frozen hard as stone.
Lines unwind in the room’s horizontal
light and you hear the howl of the grain
in the wood that weeps beneath the waves
safe in this room, while outside the sirens rage.


Hitch a ride on a freight train to Las Vegas
where artesian wells edenize the desert.
A railway town in the heart of Pah-Ute county.
Flamboyant signs arrow the way to Mecca
downtown, where Freemont Street is the field
and a James Dean lookalike stands in a doorway balling
a pack of camels into his shirt sleeve. Spend a shiney
in the Blind Pig and already you’re outside the law
on a bender along the Mormon Corridor sprawling:
AU REET—a hep cat’s call-in’

On Highway 91, aka the strip,
skip a rope with a real live doll
as the rope. Double-dutch too.  Odds
stacked in your favour and you go from rags
to riches as long as you have the chips,
baby, you’re in it. And you haven’t got a care.
On Glitter Gulch, little people feel big,
sip Atomic Cocktails and marvel at the mushroom
clouds as fallout rains down in the heat out there:
AU ROTE—he’s like the bear

Out here the grocery stores have slots
and good people go bad. Catch the stars
on the silver screen, record your dreams.
Pack away your sorrows and save them
for a rainy day. Borrow more, to live!
To live! The croupier spins and you’re calling
but this is a game to turn a profit for the house.
It is what it is, arbitrary as blood on asphalt, music
from a phonograph west of the tracks recalling:
AU ROOT—the chicks are fall-in’

Everything evaporates. Rivers run dry
and sink underground, grain elevators
graze a vacant sky. Wrong town, wrong time.
Trying to get away from himself
and his losing hand, Danny rounded
the corner just outside club Pair
o’Dice. He saw the flash, heard the crack
and the buzz of death brought him down
at the foot of the fire escape stairs:
He’s as mellow as a cello but he ain’t nowhere 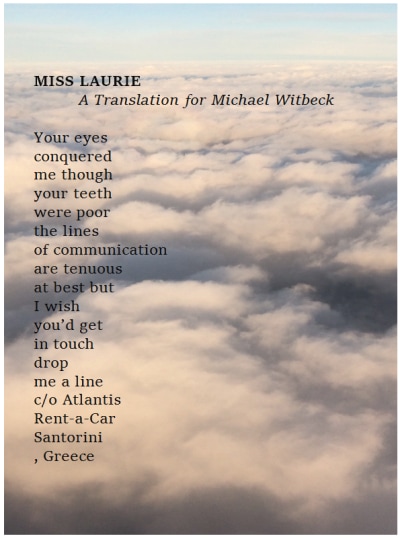 Nancy Gaffield is a Senior Lecturer in Creative Writing at the University of Kent. She is author of Tokaido Road (CB editions 2011), which won the Aldeburgh First Collection Prize in 2012, Continental Drift (Shearsman 2014), a libretto and three chapbooks. Her current research is on poet Helen Adam, whom she met in 1979. She recently spent time at The Poetry Collection, SUNY Buffalo, to examine the Helen Adam archive for a new sequence entitled After Helen (forthcoming). Written through Jack Spicer’s After Lorca, the poems appearing here are part of this sequence. The poems derive their titles from Helen Adam’s poems or prints, or collage quoted lines (in italics) from her various writings.