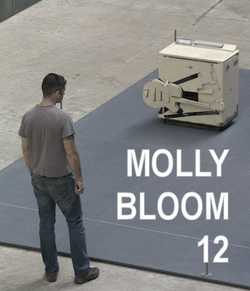 'We live in a political world' - Bob Dylan


Sometimes - and this 12th online issue of Molly Bloom lands in such a time - it can seem a fairly pointless occupation engaging in poetry. Especially, perhaps, the kind of poetry you will find between these virtual pages, poetry that endeavours to engage the intellect, that operates, to a greater or lesser extent, in what is loosely defined here as a modernist tradition, that is glad not to state the obvious, nor to be obvious in the manner in which it states anything. If indeed it can fairly be said to offer any statement.
Shouldn't one be out on the streets, waving placards, shaking fists and perhaps breaking heads, rather than sitting quietly somewhere putting together words that few will read and fewer get the sense from? Is this any way to change a world that so desperately and urgently needs changing? Probably not. And yet. We go on doing it because not to go on would be to concede abject defeat. Because in such times the mere act of thinking is itself an act of defiance.
It would be comforting to think we could speak truth to power. Goodness knows, power could do with a good talking-to. Sadly, of course, power is not listening. If, indeed, it ever does. But that does not mean that what we do here is pointless, or that it is not political. Some of the voices you will hear here engage more overtly than others with the politics of the here-and-now: in that context, I commend to you heartily the articulate anger of Kelvin Corcoran, the direct and specific reflections of Elaine Jarvest Miller, and Amy Evans's impassioned engagement with the Chilcot Report and all it stands for and against. You may detect resonances of topical relevance in the echoes of revolution to be heard in the works of Ralph Hawkins and Zoë Skoulding. But then the degree of care, precision and artistry you will find throughout this and every other episode of Molly Bloom make their own powerful political statement. This is who we are.
Aidan Semmens, editor, January 2017